The Grand agg concluded this morning with 15 shots at 600 yds. The Grand is shot over 12 different shoots plus 5 leadup shoots beforehand. Mike placed 43rd, John S 75th, myself 93rd and John M 175th. We were fairly happy with that result from 827 competitors in that comp. We shot a 7-shot team match at 3, 5 and 600yds this afternoon without a great score as there was a bit of trialing Games gear and sight zeros.

This was followed by the St George stage two which John S shot 74 and goes to the final on Sat morn at 900yds, while Mike shot 72 but thinks hes missed out. Tomorrow morning we shot a teams match of 10 shots at 3, 5 & 6, then Mike and John x 2 shoot stage 2 of the Queens. A really hot day today. John Snowden needed 2 ice creams!! A lot of very pink British folk about as well as the odd Kiwi.

The Tale of a Masterton Shooter

Not sure if you were aware, but John M had his suit case stolen off the train just short of Bisley. The letter he posted on the Bisley notice board explains his story. I hope you can read it.

A Letter to FRIENDS 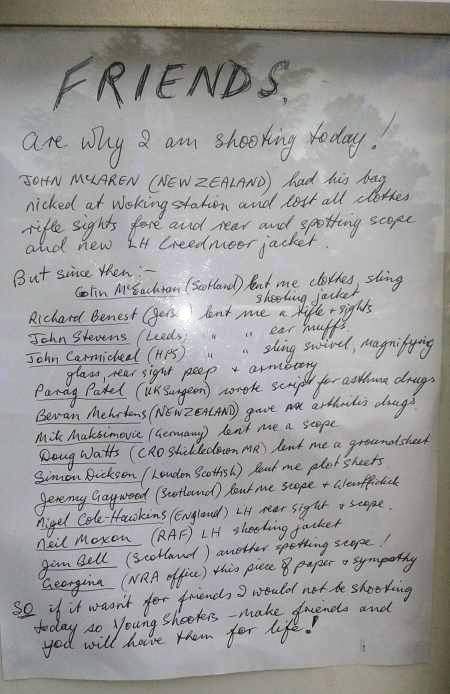